What is a RUSH?

History of the RUSH...
Force of Nature started this tradition in 2016 on a faithful Wednesday when a theater owner was forced to close the run of a show early and asked if we had anything we could put up in its place. He needed a show to fill 3 nights the following weekend.

Not really known for saying "no", we quickly contacted our team of writers with a challenge: To deliver a 10 minute script by the next day about anything that inspired them.  Scripts were turned in by noon on Thursday and a team of actors were quickly assembled to rehearse these scripts cold that Saturday and Sunday.  Costumes, make-up, sound and props were
selected as we rehearsed along and, by the following Thursday, exactly one week from when the scripts were delivered;
we came together to tech the show.

The show opened on Friday and played the 3 nights to SOLD OUT houses!  The cast was fantastic, the audiences cheered and loved it, the theater owner was pleased, and everyone had a wonderful time! And boy did we celebrate!

We've come a little ways since then...
Having learned from each passing RUSH; we've come to refine the process since that first one. (Although, we definitely
learn something new every time).  The RUSH has now become a tradition that takes place about 3 times per year,
each one themed differently and always throwing in new surprises for everyone involved.

Not only does the RUSH allow our company members to try their hands at new things, such as writing, directing, and acting,
but it also serves as a gateway for new people to get involved with us.

A RUSH typically consists of assembling a team of writers, directors, actors and musicians at random, via a lottery, to create original works in a 3 week period to be put up over one magical weekend! Just like the very first one!
It’s fun, challenging and thrilling all rolled into one beautiful ball of chaos! It's most certainly a RUSH!

rushes through the years! CHECK them all out HERE! 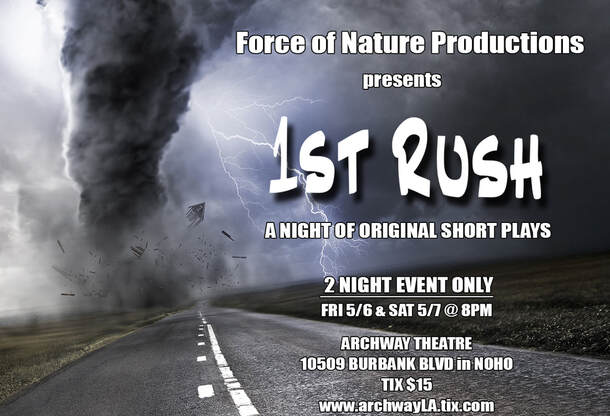